When I was a kid, my family had a birthday tradition. It was when it was your birthday, you got to pick what we were having for dinner.

I continued that tradition with my kids. Sometimes they pick having their favorite homemade meal, other times they picked a chain sit down restaurant.

As a kid, my pick every year was Clark’s Submarine Sandwiches. I remember when we sat down to eat them, I was always the first one done eating!

Have you ever had a Clark’s submarine sandwich?

If you haven’t, you missed out. Unfortunately, they are no longer in business. They had the best bread and seasoned oil EVER! I have not been able to find a sub sandwich that comes close to how delicious they were.

I recently found Beano’s Original Submarine Dressing at the grocery store. So I thought I would give it a try.

It’s good, but not the same as the oil from Clark’s.

So I’m still on the hunt!

Did your family have any birthday traditions?

This taco seasoning is gluten free and preservative free.

Because you are making it yourself, you can adjust the amount of chili powder to increase the heat! 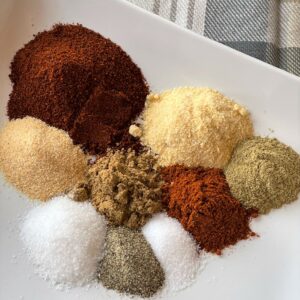