Last fall while visiting my in-laws we had a delicious meal. Potato soup and fry bread!

This was the meal my father-in-law had every Monday night. Monday was the day his mother made bread, so she would fry some of the dough to serve with dinner.

Soup is a great cold weather meal and I’m a sucker for bread. Any kind of bread! This bread isn’t the kind you dip into the soup. It was covered with butter and powered sugar!

Now I don’t make my own bread, but this meal is currently one of my family’s favorites. I just use frozen bread dough instead!

To make the fry bread: Place a loaf of frozen bread dough in a bowl and let rise until doubled in size. Heat vegetable oil in a fry pan (about 1 inch deep). Once oil is hot, pull off a small portion of dough and stretch until thin. Place in hot oil and fry until dough is golden brown on both sides. Spread butter on hot cooked bread and sprinkle with powered sugar! 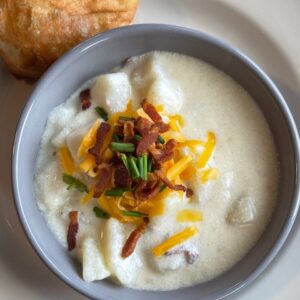